Value added tax is not collected, as small businesses according to §19 (1) UStG. plus Shipping Costs

Stories included in this anthology are:

K&A by A. Laraine Steele of The Ferrin. The robbery seemed to go down just as planned…

Thief’s Apprentice by Sophie Pfrötzschner of Soul’s Journey. A pickpocket is mentored to turn into a master thief.

Royal Pain by Jen Zyren Smith of LaSalle’s Legacy. A young noblewoman yearns for a challenge.

Lost Things by Andy Purviance of I, Mummy. When magic is outlawed only outlaws use magic.

The Quiet Apprentice by Blake Chen of Twilight Lady. Two Nemsiiki warriors enter a hive of scum and villainy. Will they get out alive and with their sanity intact?

The Knight and the Knave by Christina Major of Sombulus. A virtuous paladin tries to win a wager, but sometimes the only card that can win against a knave is another knave.

All That Glitters by Kat Feete of Sunset Grill. A rising young gangster faces a terrible ordeal: his grandmother’s birthday party.

The Chasbury Job by Felix Wright of From The Machine. A young thief is hired by a sky-pirate gang to carry out a heist.

The Trickster by Ewa U of Bits Fair. A talking snake needs some assistance.

Relics by Ally Rom Colthoff of Chirault. Two urban explorers enter a derelict power plant, and find it’s not as abandoned as they thought.

Shifting Sands by Kristen Kiomall-Evans of XII: Of Magic & Muses. A group of bandits find out some gems are best left untouched.

The Grand Heist!! by Star Prichard of Castoff. Stealth! Action! Intrigue! A self-proclaimed master thief tells the story of her greatest heist yet… to anyone willing to listen.

Eye of the Beholder by Tiffany Ross of The Cyantian Chronicles. Rama, Cyantia’s most infamous villain, was a cub once.

In Space! by Caroline Parkinson of Beneath the Clouds. A space pirate decides to rob a cargo ship. Kite-surfing, space whales , hijinks and more!

A Death at the Gates of Heaven by Mathieu Moyen of 6-Commando and Ally Rom Coltoff of Chirault. Man and machine join forces to solve a murder mystery in space.

There are no reviews yet.

Be the first to review “SpiderForest Anthology: Threads Vol. 2 – A Gallery Of Rogues” Cancel reply 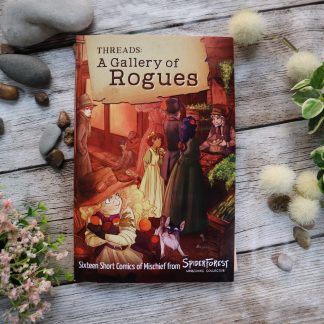 You're viewing: SpiderForest Anthology: Threads Vol. 2 – A Gallery Of Rogues 18,00 €
Add to cart